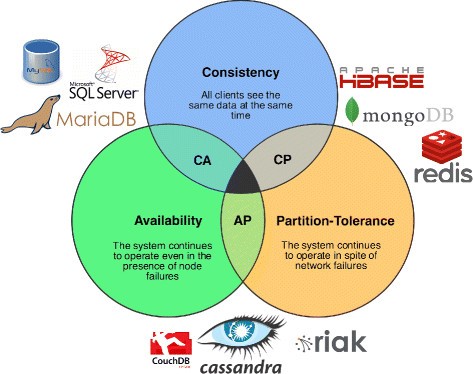 Most NoSQL systems fit in the Availability and Partition Tolerance categories. The category Consistency is slightly different for NoSQL: instead of consistency, it offers eventual consistency.

Within software development, the expected performance criteria determine the choice of a data store: the estimated system load, the maximum and average numbers of simultaneous users, the supposed data volumes, and the duration of the period during which data has to be available. A second step is the analysis of the nature and usage of the data and the functionality of the application: do the users only consult the data or do they report it, as well? Are there any transactions? Are the data being processed online?

The selection of a NoSQL database depends on different factors that are not necessarily related to scalability:

The number of NoSQL products is increasing, which can make it difficult to base a choice solely on pre-formulated demands. There are compatible solutions with sometimes very subtle differences. All details deserve careful consideration – from the API and availability of support to the characteristics of the community. NoSQL data stores can be categorised as follows:

Key/value stores
These databases allow for efficient data storage. Compared to more advanced databases they are very limited, because they only offer one way to access the data (value). Other ways require external management, for instance via Lucene or an index that is being managed by the application.

Graphical databases
Within these databases, data is stored in graph-like structures, instead of linear lists or key/value-pairs. They are especially suitable for social networks and offer a natural model for the relationships between users.

OptimaData can help you in determining which NoSQL version or hybrid solution is most fitting to your situation.

Click below to view our services regarding NoSQL. We offer consultancy, trainings and staffing services on this platform and support.