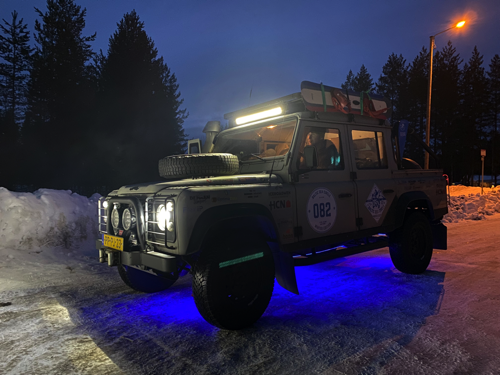 Edco Wallet, co-owner of OptimaData, and friend Sjoerd Oskam participated in the Baltic Sea Circle Rally Winter 2022 at the beginning of this year. From Hamburg via Denmark, Sweden, Norway to the North Cape and via Lapland, Finland and the Baltic States back again. Without a navigation system, it was a true expedition. Why did they do this and what are the parallels with entrepreneurship? Edco explains in this blog.

A journey full of lessons

Sjoerd and I both wanted to go to the North Cape once in our lives. Of course you can take a plane in July or hop on a tourist bus and enjoy 24 hours of sunlight a day, but that's not quite our thing. The Baltic Sea Circle Rally is an established (winter) rally to the North Cape and back. You do have to meet a number of conditions. For example, your car must be at least twenty years old, and you are not allowed to use a navigation system or to use highways. Just old skool map reading and using a compass. And that for 8,500 kilometers, through 11 countries in 16 days, at temperatures between -10 and -30 degrees Celsius with snow, lots of snow. A journey full of lessons. It’s like entrepreneurship...

1. Make sure you have a good preparation

Like entrepreneurship, an expedition also starts with thorough preparation. For example, we did extensive research into what type of tires would be most suitable for the ride. Following the advice of local Norwegian people, we opted for a special Norwegian winter tire, the Nokian Hakkapeliitta. Such a tire works like a sock on ice, making spikes unnecessary. We also decided to bring a refrigerator. It may sound strange, but if it is 18 degrees Celsius above zero in the car and minus twenty outside, where do you put your beer? With a fridge you can regulate all that a bit better. We also needed a good heater, a double battery, better coolant and extra lighting. Other than that we just had to go with it. As a control freak I would have preferred to arrange all our accommodation in advance, but that was impossible because we had no idea where we would end up. It was hard to let go, but it also gave us flexibility. Setting up a business also starts with good preparation. You make a business plan based on research, you decide to go for it and then you just have to let go and be confident.

If you embark on an expedition, you really have to see it as a journey in stages. If you take the whole journey as your goal, it becomes much too big, too abstract, too confusing. If you divide it into stages, as it were, put down markers, it becomes more manageable and you can adjust your subgoals more quickly and react to the circumstances. Not: we have to go to the North Cape, but: today the journey goes to village X. If you got there, you've achieved your goal for that day, and tomorrow comes later. It works the same way in business. If you keep your goals small, chopped up into pieces, the road becomes a lot clearer. Not only will you not get in over your head so quickly, you will also have more occasions to celebrate something.

We had to drive an average of five hundred kilometers every day. And not on the quiet asphalt of the Dutch highways, but from the second day on we only saw snow, five centimeters or more with a layer of ice underneath. We couldn’t go faster than fifty kilometers an hour and at some points we had to stop every ten minutes to defrost the windshield wipers. Meanwhile, you want to keep going as fast as you can because you don't want to arrive at your destination too late. Still, you have to take enough rest, which keeps you energized. It helped that we really had to get out of the car to rest. That’s something you really have to do regularly in business too: step out of your company for a while, as it were, and take a look at everything from a distance. Are we still going in the right direction, is everything still going the way I want it to go, are the metaphorical tires still in good condition? Especially when you don't really have time, you should step out once in a while. There is an old piece of wisdom that says: Have twenty minutes of quiet time every day, except when you are busy. Then have an hour of quiet time!

4. See the journey as the destination

We humans tend to fixate on our goal, the end point. But don't forget that the way there is just as beautiful. Keep looking out the window and enjoy, regardless of the goal. As an entrepreneur, sometimes you want to get to the top way too fast. You put on blinders and go up that mountain, put in the hours and blast away. If you do that, chances are you'll stand at the top and realize: Is this it? Or even: Haven't I climbed the wrong mountain? Enjoy your path, enjoy collaborations, and the whole experience of being an entrepreneur takes on so much more value.

Most important of all: never forget to have fun. During the expedition, we were given an extra challenge every day. For example, we had to open a can of fermented Baltic herring (surströmming) in the car and drive around with it for 200 kilometers. We bought a can, opened it and even tried to eat it, but it was really the nastiest thing I have ever smelled and tasted in my life. Even though you would like to swallow it, your body just says ‘no’. But what a laugh we had. It works the same way in our company. Sometimes the fun arises naturally, in the conversations we have, and sometimes you have to create it yourself. For example, we once had a great laugh at Gerard with an April Fool's joke. And that' s part of it too. After all, it shouldn't feel too much like work, should it?

Would you like to know more about our trip? Check out our aftermovie. We paid for the car, the trip, the accommodation and our food and drinks ourselves. Donors and sponsors (such as OptimaData) contributed 5,115 euros, which has gone to Movember and International Justice Mission. Wondering what we as OptimaData with our expertise and services can do for your organization? Or is your interest piqued to explore whether you would like to and be able to work with us? Feel free to get in touch with us.