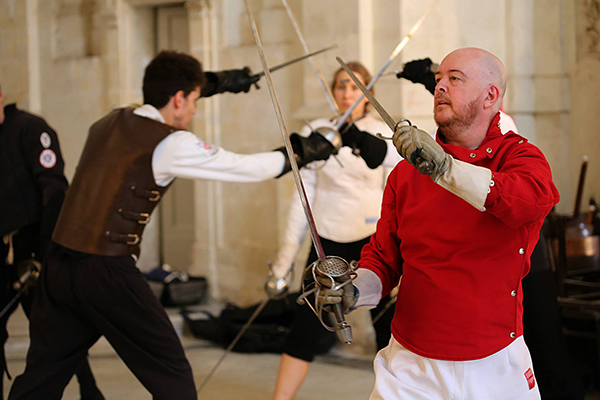 Craig is an experienced DBA consultant with years of experience in large experimental environments with complex hybrid designs. In fact not very different from what he did as a civil engineer, he thinks. In this blog, Craig tells Femke more about his work and about his special passion for medieval swordsmanship. He also makes the link between creating a future-proof database and flying an airplane.

Accidentally in the database world

My roots are in England, but I've been living in the Netherlands since 2009. I ended up in the database world by accident - literally. After college I started my career as a civil engineer, but after I had a serious motorcycle accident and my knees didn't want what I wanted anymore, the doctor advised me to switch to an office job. I then started studying computer science.

Start with a good foundation

If you study computer science, it's a logical step to become a programmer. But I found that far too chaotic. All those programming languages and frameworks you have to choose from, and then once you've programmed something, you're often left with a huge monster that has to be maintained. The world of databases is much more structured: you first build a solid, reliable foundation and then you build on that. I like structure, I like building things, that is also why I started as a civil engineer. There, too, you have to make sure you have a good foundation before you lay the first brick.

In my spare time, I have been involved with Historical European Martial Arts (HEMA) for about twenty years, which is about the study and practice of historical European fighting techniques. I even train at the SHS, the School of Historical Martial Arts. One of the major differences with Asian martial arts, such as judo and taekwondo, is that within the Asian "branch" there are still direct descendants of the masters. Contemporary masters who learned from a master who in turn learned from a master before him. In Europe, many fighting traditions have died out or evolved into purely sporting forms, such as sport fencing, boxing, wrestling. Fortunately, many European masters have left manuals in the form of books. These are translated and interpreted to reconstruct the ancient art.

My father worked for an airline as a sales manager. As a child, I flew a lot because of this and it intrigued me immensely. How great is it to be in a plane that takes off and brings you up above the clouds? I thought it would be even better to do that myself, so I got my pilot's license. The funny thing is that flying a plane is a piece of cake, but the preparations are the real work. It's different than getting into a car to go for a drive. Before you take off and can enjoy a carefree flight, you have to check the weather forecast, make sure you have enough fuel for the distance you want to travel, you have to know where you can and cannot fly. Again, that analogy with putting up a building: first you have to make sure you have a solid foundation before you can get to work.

Always in need of knowledge and expertise

When I look at the future of databases, I do not believe that anything fundamental will change. As with other technologies, changes take place in constantly recurring cycles. Then SQL is hot again and then it isn't for a while. Of course, what won't go away is the cloud. That only makes management and maintenance more complex. In that respect, I totally agree with what Gerard wrote in his blog. Yes, we will be able to automate more and more database work, but there will always be a need for knowledge and expertise to set up a database as efficiently, scalably and future-proof as possible. And a good foundation is vital for this. Or am I repeating myself now ;-)

Would you like to talk more about our services and what our experts can do for your company? Feel free to contact us, we like to get to know you.